What matters is that suddenly they knew more than they had known, and what they knew—what they suddenly understood—was that they were vulnerable. Their awareness of their vulnerability might have led to their excuse-making, too. Until that point they had enjoyed a blissful relationship with the Creator; nothing that had passed between them and God should have given them a quick rise to fear.

Yet suddenly attuned to their vulnerability, they feared enough to hem and haw and look for someone else to blame. We tend to think of the first sin as one of simple disobedience, and perhaps it was.


But perhaps there was another component that deepened the offence—the lack of trust, manifested in a refusal to be wholly seen; humans covering themselves up both physically and metaphorically, with fig leaves and with the sloughing off of blame onto others, rather than revealing themselves and taking responsibility for their actions. The taint of Original Sin: God has been trying to get us to trust Him, to reveal ourselves to Him and to be vulnerable and open to Him ever since.

Perhaps this explains the command by God for the Jews to circumcise the men. The foreskin of the penis affords some protection for the organ—a bit of shelter, a place to hide. When God chose the Jews as His own, he required this symbolic and real acquiescence, this willingness to be completely vulnerable and exposed to whatever may come. The unsheathed penis is extraordinarily sensitive and responsive—precisely the qualities God wanted of the Jews.

He made a covenant with them; He would be their God, they would be His people, and the deal was sealed in blood. At its shedding, man and God are bonded. The need to be vulnerable and open to God is part and parcel of having a real relationship with Him, just as it is the necessary component in human relationships. We see the blood covenant and the need for vulnerability and openness mirrored in the relationship between a husband and wife—or we did, when virginity was kept for marriage.

The thin membrane of the hymen is a kind of counterpart to the foreskin. In shedding the foreskin the Jew becomes openly vulnerable to God. In remaining a virgin until marriage, the woman becomes vulnerable only but fully to her husband, and he—in receiving that vulnerability—answers only to her, gives his deepest self and the sweat of all of his labors to her. It is another blood covenant. At the shedding of that blood, they become one flesh.

One entity. When we talk of Jesus, the bridegroom shedding blood for his bride the church, we might remember that his bride shed blood at the beginning, and still does so, today. Why do we not know that?

Who Told You That You Were Naked? - 3G Publishing, Inc.

This parable, is supposed to denote mans fall from perfection. The first step in dissonance with the creator who made everything perfect. Abiding in the peace of the moment is the way to create heaven on Earth, while judging, worrying because of the busy, curious mind, is the way of knowledge or worldliness.

Attending to worldly matters through selfishness of the will, is in direct contradiction to every faith. While there are those too who seek to gain through their faith, but only build the pain of a disconnected existence.

Not Prepared to Donate?

For he knew that in order to gain great wealth, you must be advantageous and single minded about it. He knew that in order to acquire great wealth, being charitable, compassionate, honest and connected are impossible, if the majority of their waking hours are spent the day on acquisition. So too, with this warning against gaining superflous knowledge, that it has in it's capability, to incur a dissonance between man and his creator. This is why the majority of scientist and doctors are atheist. It meant that in the Garden of Eden, man and woman and all the creatures had no perception of the need to be covered up.

They all lived in perfect innocence, and were therefore oblivious to the concept of clothing. When God called for him, Adam was hiding from God for the first time ever. When God looks at a Christian, He only sees the perfect sinless Blood and He accepts the sacrifice by accepting the person. Rather it was one of the results of the sin.

Let us receive His forgiveness and be cleansed from all unrighteousness! Did you eat from the tree of knowledge? Animals would not know if they are naked. Adam has acquired self consciousness by eating the fruit. Without having self consciousness, humans would not be human.


Having self consciousness can not be a sin. That's where the misconception of the Biblical record is starting. Once you have self consciousness, you are becoming like God and the god devil didn't like it. Because you can no longer be subjugated and be a pliable slave. However, once you admit to this humongous false hypothesis, you actually start becoming a slave, an animal like status that will do any inhuman things possible when the "alleged god" tells you to do it.

So the bible was wrong from the beginning. And it was carefully and deliberately designed and crafted that way to make you a slave and nothing else.

You, whoever it may be, can not be reduced into a slave no matter who tells you and concoct a story to make you so. Sign In. 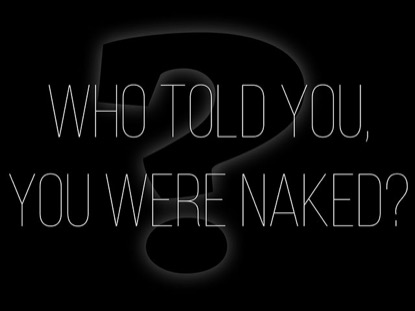 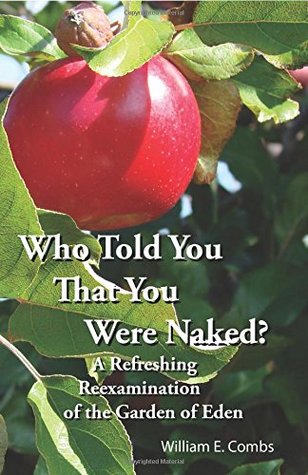 Related Who Told You That You Were Naked?